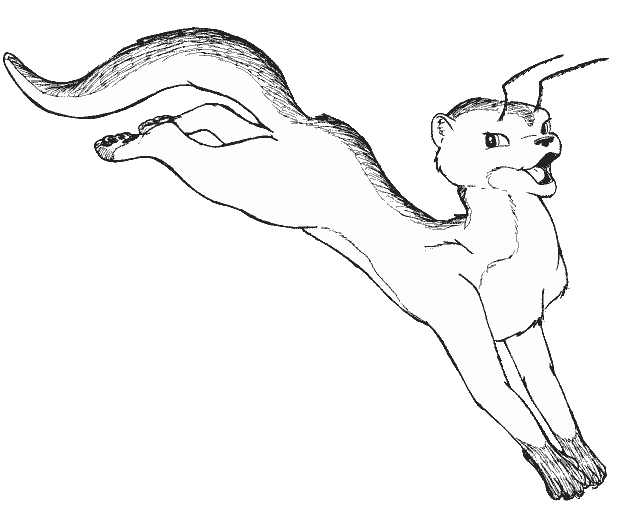 Note:
The contents of this webpage are collected from various sources, some of which may be unoffical.
Thus, please read knowing that this information may be unreliable.
This is further impacted by the fact that I don’t know what I’m doing.
Image by SySable.

Skiltaire are a species of intelligent, sentient weasel-esque aliens. They were created by Mark Merlino in 1971 and feature in a number of science fiction stories.

They generally vary in size by subspecies and sex, averaging 91 cm in length, excluding the average 46 cm tail. Males are 10% larger than females. They look very similar to Earth mustelids and occur in two body types, arboreal and aquatic.

The Arboreal type bears a resemblance to martens, and have large ears, curly antennae and brush tails.
Their coat typically has earthy, warm tones to help them camouflage in their land/tree environment.
They have a unique colour variation, “flame,” where the fur colours are warm yellow, orange and red, so that the coat looks like ‘fire,’ thus the name.

The Aquatic type more resembles that of an otter, with a short, broad muzzle, longer and straighter antennae, small, rounded ears and a thick, tapering tail for swimming.
Opposed to Arboreal, their coats have ‘cool’ colouring, usually limited to gray, brown, light blue, tan or cream.

The fur of a Skiltaire can be any colour, although they will usually have the coat colour of their respective subspecies.
They often have a single wide or multiple thinner stripes that run up their back, from tail-tip to the top of their head, and darker paws and ear-tips. The stripes can be any colour, and are usually darker or more intense.

A neon skiltaire has a stripe of highly contrasting color, darker in the middle and grading to pastel edges so that the stripe seems to glow. The neon pattern is most common in aquatics because the base fur color of aquatics tends to have less range than their stripe colors and allows the stripe to contrast more strongly.

The two subspecies frequently interbreed, the resulting children "Skilkits" usually take after one of the subspecies with little to no hybridisation.

An obvious characteristic on all skiltaire is a pair of 10 inch (25 cm) antennae which grow from just above the eyebrow. The antennae are the detector part of the animal's natural electrostatic field sense ability. The antennae are modified eye whiskers, and are made up of large interlocking sections that have small, back-facing barbs at the junction of each section.

If the protein cells are damaged, and the tendons and nerve endings are severed, these sections can and usually will grow back, though it takes as long as a year for part of a broken antenna to grow back. If the base area of the antennae is damaged, the antenna may be lost permanently. There are four aspects, “Warm”, “Bright”, “Dark” and “Soft.” 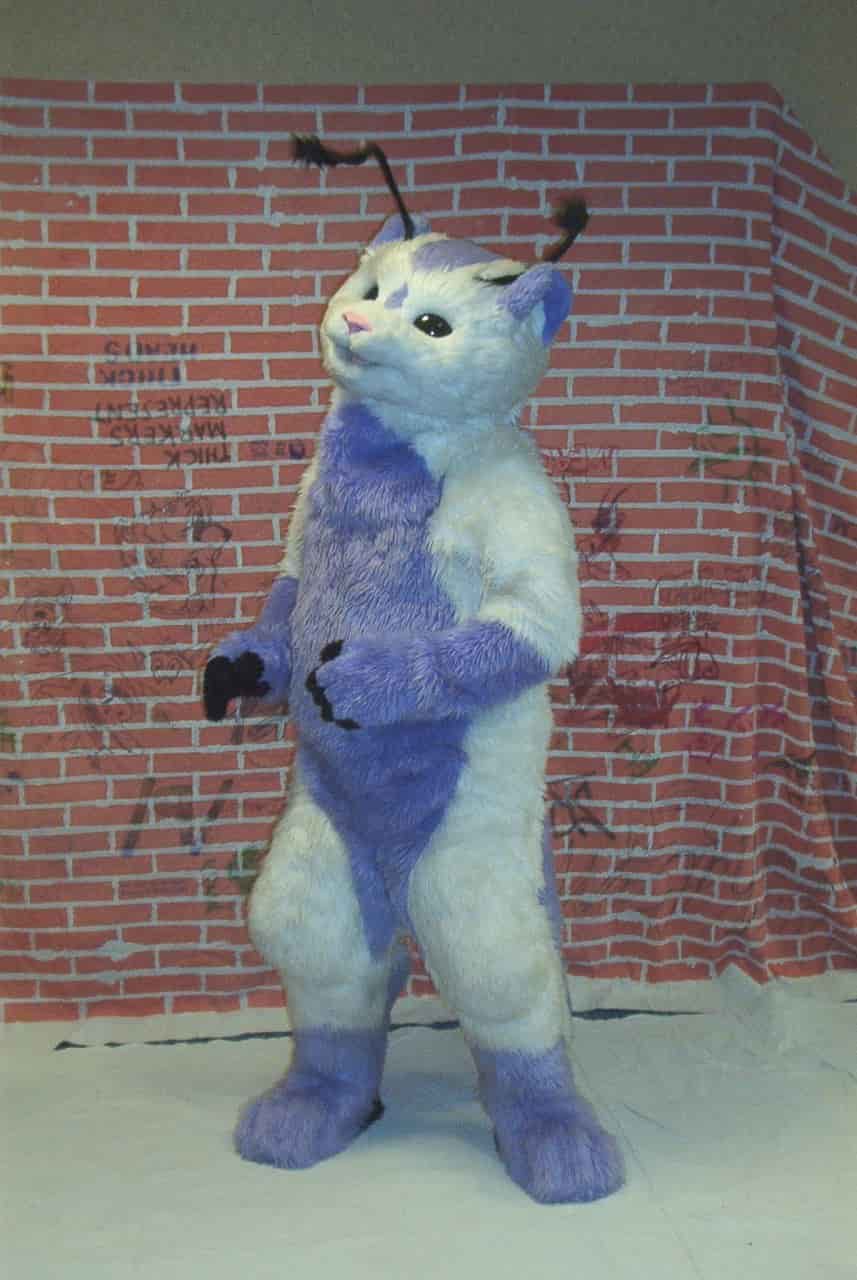 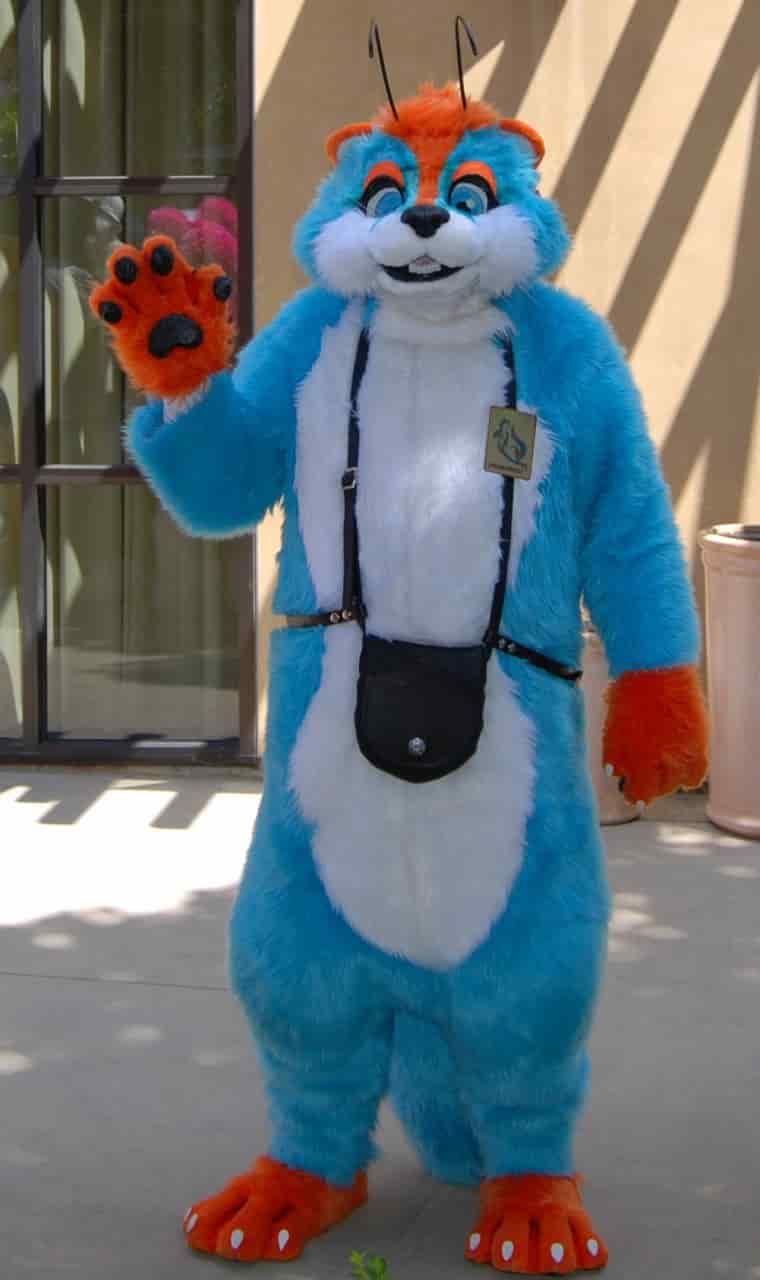 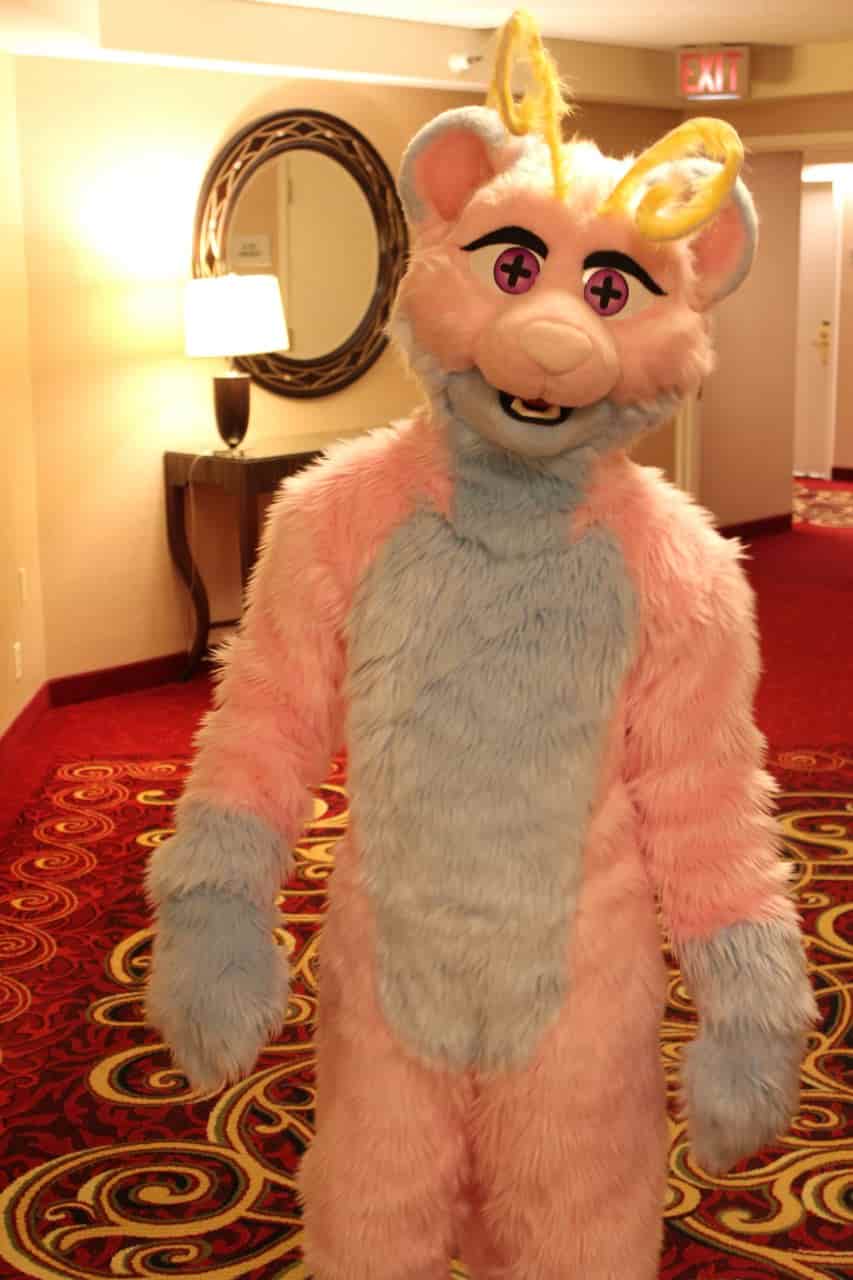 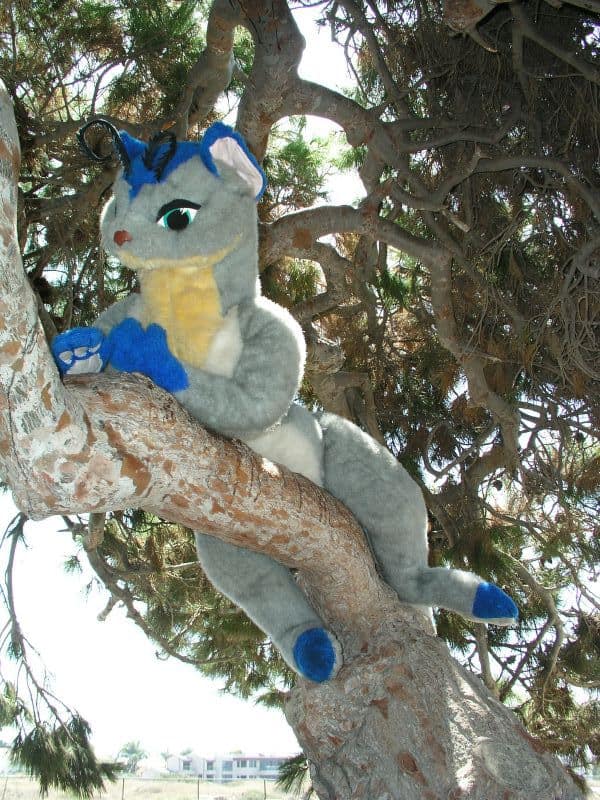 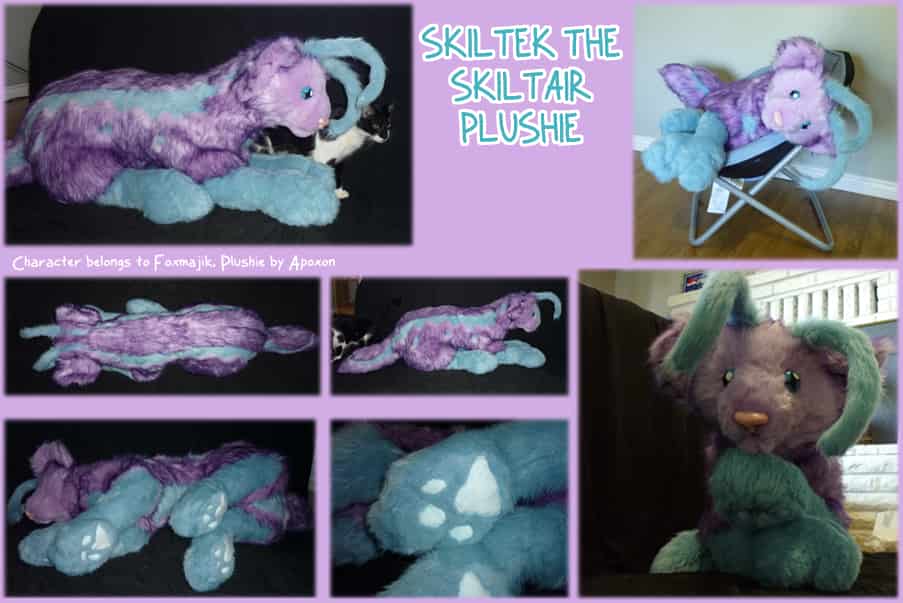 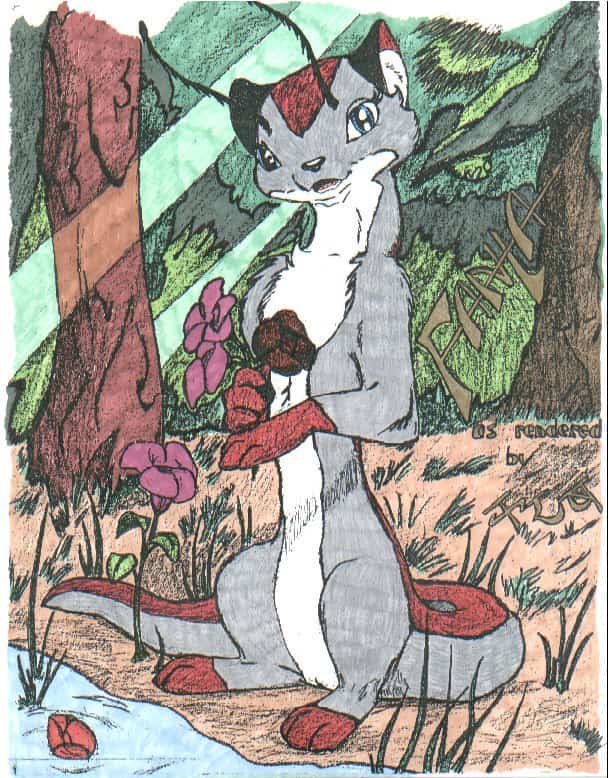 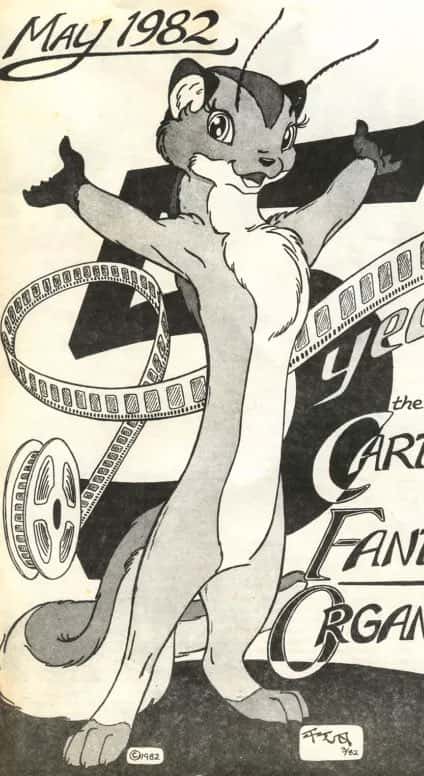 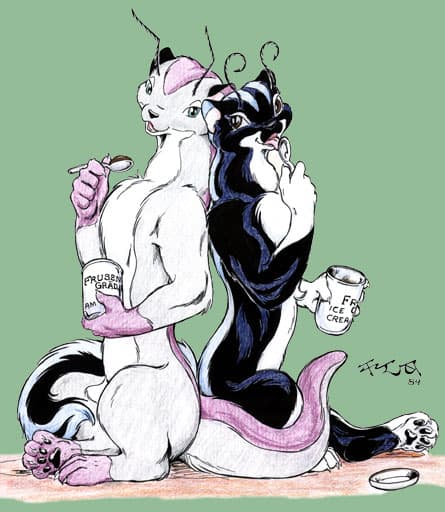 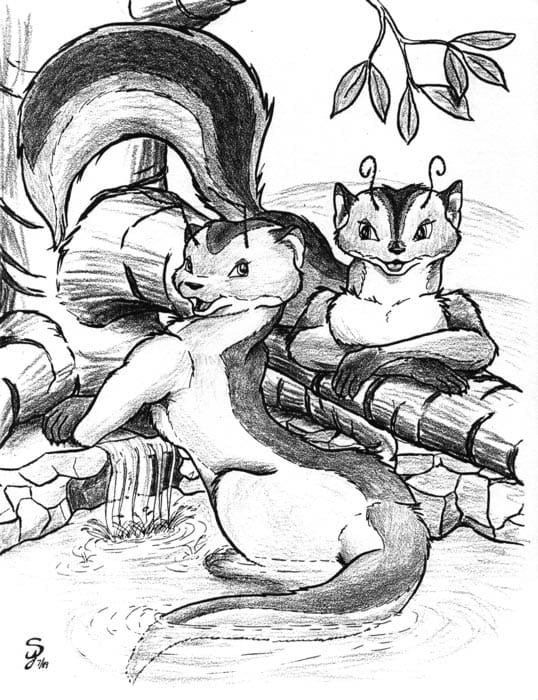 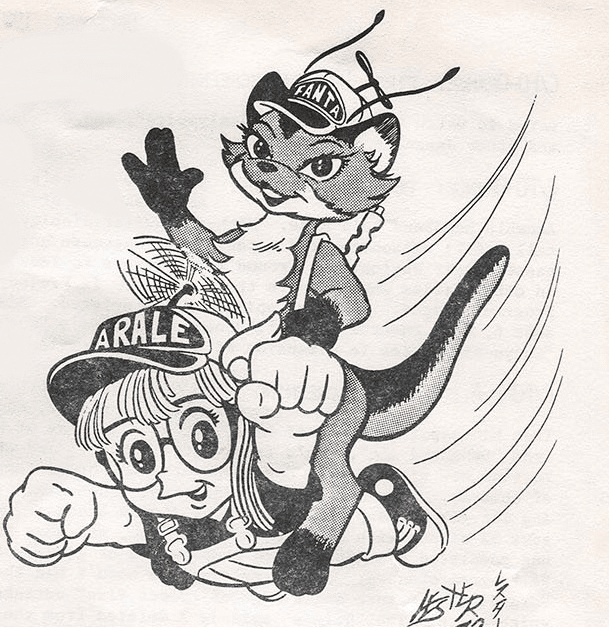 More information about the Skiltaire can be found within these following links.

Click on the Skiltaire to go back to the home page!